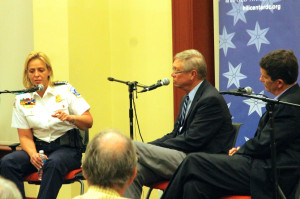 Just days before D.C. residents can apply to carry concealed firearms in public, the Metropolitan Police Department is still ironing out the rules with legislators.

City officials and the MPD are working down to the wire to have concealed weapon rules ready when they go into effect Wednesday, Metropolitan Police Department Chief of Police Cathy Lanier said.

“We’re scrambling to get everything done by that date,” Lanier said at a question-and-answer session held on Capitol Hill Tuesday night.

Lanier will have discretion to approve or deny applications, which will first become available on Wednesday. She said she expects revisions to the emergency legislation signed into law last week.

The police chief weighed in on policing strategies, her next position and more in the talk at the Hill Center with NBC4 reporters Mark Segraves and Tom Sherwood.

On Officers’ Need to Carry Guns: Lanier responded to Councilman David Grosso’s comments last week questioning whether all MPD officers need to carry guns. “We’d all like to live in a society where no one has to carry a gun to enforce safety standards, but that’s not the society we’re in right now,” she said.

On Broken Windows Policing: “I think the whole zero tolerance policing thing is what we’re seeing play out across America today … I’m not a fan of zero tolerance policing. I think it alienates the community. What you’re doing is arresting the largely law-abiding citizens in neighborhoods with the most crime. What you’ve done is alienated your victims and witnesses.”

On Her Next Job: “I’m flattered every time I get the calls [about other positions], but I think I’ll know when it’s time to go and I just don’t feel like it’s time to go.”

On Women and Work: “Most male chiefs have wives at home doing their laundry and cooking. I don’t have a wife at home. I have to do my own laundry, my own grocery shopping.” She said she tries to reserve Sundays as personal days but often reports to crime scenes and hospitals.

On Supporting Police: “Being supportive of officers and saying thank you helps boost morale,” she said. “You would not believe how big, burly, kind of macho cops get all red-faced and grinning when someone reads a nice letter.”