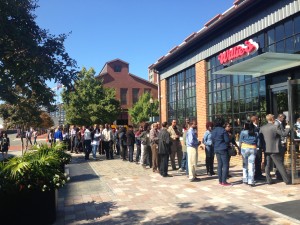 Willie’s Brew & Que opened in the Navy Yard on Friday, and the duo of brothers who run the restaurant say they’ve working on serving “the best ribs in D.C.”

Ed Howard and Rahman “Rock” Harper, who was featured on the show “Hell’s Kitchen,” are serving brisket, pulled pork and Korean-style wings.

Howard, who manages the restaurant, said the popularity of Willie’s thus far has been “pretty overwhelming.” Located at 300 Tingey St. SE, next to the Department of Transportation building, the restaurant offered free lunches to DOT workers for three days last week before they opened their doors to the public on Friday.

Howard said the bankruptcy of the restaurant’s parent company, Barracks Row Entertainment, delayed the opening of Willie’s. When “the dust settled,” the company was still enthusiastic about the project, Howard said.

Willie’s is serving more than just “the normal mix of beers,” Howard said. The restaurant has 12 beers on tap and more than 10 canned and bottled beers, including New Belgium’s 1554 Enlightened Black Lager, Dogfish Head’s Namaste Belgian white and a “lot of North Carolina and Georgia beers, in keeping with Southern barbecue.” 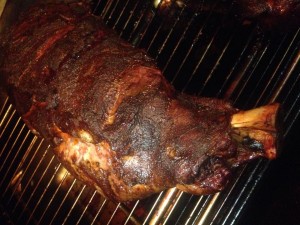 The 105-seat restaurant has 14 TV screens. Howard hopes sports will be a big draw, and has a beer discount planned for Monday Night Football next week.

The brothers aren’t yet serving vegetarian entrées yet, but Harper said he is “in the lab with tofu.”