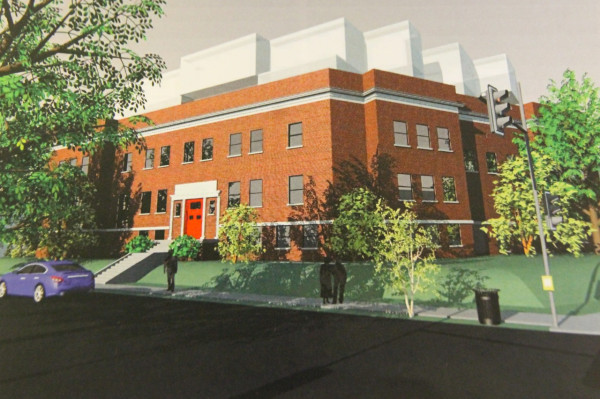 Representatives for two developers and a national nonprofit said they’re preparing bids to the city for the redevelopment of the 31,000-square-foot facility at 261 17th St. SE, two blocks west of the Stadium-Armory Metro station.

The first plan presented to the Hill East Task Force of ANC 6B would create a white, two-story addition on the reddish brick building, said Corey Powell, senior vice president of development for Dantes Partners.

“The intent is to preserve the existing building and simply add to it,” Powell said about the design (pictured) to create 49 units plus community space.

Dantes Partners’ development would cost more than $6 million to build and would be financed through federal Low-Income Housing Tax Credits, Powell said. Renters would pay about $1,000 per month.

Dantes Partners has created other city housing for seniors, including the fully occupied Hodge on 7th building at 7th and P streets NW.

The second plan, from Century Associates, would create 24 to 30 larger units for seniors. The project would not add additional stories, company president Joel Kelty said.

“I think the scale of the building is perfect for the neighborhood,” he said.

The larger units would appeal to seniors who live in Hill townhouses now but need one-story homes.

The Century project — which would include children’s activity space — would be privately financed. Kelty declined to give projected dollar amounts for construction or resident rent.

The third plan presented at the pre-Halloween meeting in the Historic Congressional Cemetery chapel would create 39 units of senior housing, plus community space and offices for a nonprofit.

Mai Fernandez, a Ward 6 resident and the executive director of the National Center for Victims of Crime, said her organization wants to house seniors and help them cope with crime.

The think tank and training organization would teach seniors how to avoid becoming victims, Fernandez said. The group is seeking to partner with a developer, and is working with an architect and a development consultant. NCVC is seeking tax credits for the project, Fernandez said.

The NCVC development sets aside 3,000 square feet of community space that would double as space for the organization’s trainings.

Bids are due to the city on Nov. 20 and will be subject to public comment.