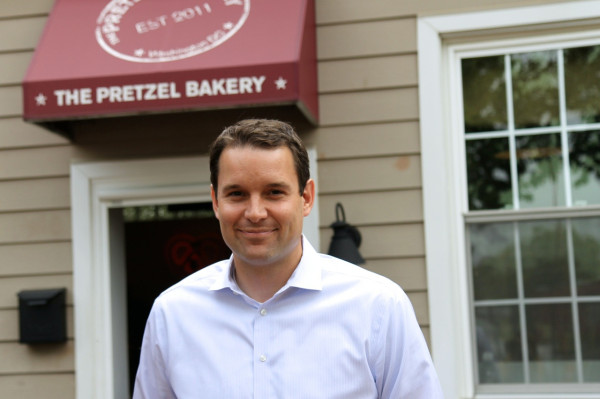 Brian Flahaven pays tribute to the “tradition of activism” on the Hill and wants to shepherd his own corner of the neighborhood into the future.

Flahaven, 39, has lived in Hill East since 2007 and was elected the area’s ANC 6B representative in 2010. He’s on the ballot again tomorrow (Tuesday) and is unopposed.

The Illinois native said he wants to help plan the future of Reservation 13, close the homeless shelter at D.C. General, increase access to the waterfront and make the neighborhood a destination. However, “I don’t think we want to be another H Street or Barracks Row,” he said.

Hill Now spoke with Flahaven, who works as a legislative director for the Council for Advancement and Support of Education, about his life and volunteer work in Hill East.

Lives: Near 17th Street SE and Potomac Avenue SE with his wife, 14-month-old son and a 2-year-old miniature Dachshund. “She’s the worst constituent dog you could imagine,” he said. “She barks at everybody.”

Favorite Glimpse of Old D.C.: The Historic Congressional Cemetery. “It’s a great way to have a ‘serenity now!’ moment. I wish more people knew about it.”

What Changes He’d Like to See on the Hill: 1) Make streets more pedestrian-friendly, especially around 17th Street SE. 2) Keep the neighborhood diverse and affordable as it develops.

On How to Be a Better Neighbor: Take the time to meet your neighbors. “It really adds to your quality of life and sense of place.”

more stories
Previous
Charles Allen: Why You Should Vote for Me
Next
Morning Rundown