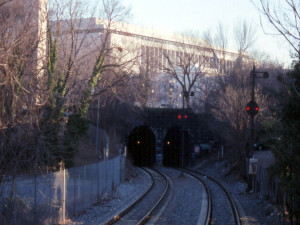 A city watchdog organization will sue to try to stop the federally approved CSX tunnel reconstruction.

A day after the Federal Highway Administration gave the Virginia Avenue SE railway tunnel project its final stamp of approval, a representative of the Committee on 100 for the Federal City told Hill Now the nonprofit will file a lawsuit against the administration in the coming days.

The lawsuit will claim the $170 million project to enlarge and reconstruct the 110-year-old tunnel that runs beneath Virginia Avenue SE from 2nd to 11th streets would inhibit the growth of commuter and passenger rail and inadequately handle hazardous cargo, vice chair Monty Edwards said.

“This project would be unlawful, premature and problematic,” he said.

The filing will also argue that the District Department of Transportation improperly entered into an agreement with the owner and operator of the tracks, CSX Transportation, before an environmental impact study was completed.

The FHWA would not comment immediately on the issue. Rob Doolittle, a spokesman for CSX, declined to comment on the expected suit but said CSX is committed to working with the community and keeping locals informed through a community office, briefings, its website and its social media accounts.

James McPhillips, who lives near the tunnel at 3rd Street and Virginia Avenue SE, called on the D.C. Council to deny CSX the permits it needs at least until the Council finishes a survey of the D.C. rail system. McPhillips said he worried that having construction and moving trains in one place could cause catastrophe.

“We’re going to continue to fight because we have elected representatives who need to listen to us,” he said. “This project is going to harm a lot of people.”

McPhillips is a member of DC Safe Rail, a grassroots group opposed to the project. The group is planning a protest soon against the FHWA’s decision, he said.

The CSX spokesman said crews will only work on one tunnel at a time, keeping a lane clear for trains. He addressed another common concern from neighbors, saying, “at no time will a train operate in an open trench in front of residences.”

Despite vocal opposition from some locals, other Hill residents are eager for the CSX project to advance. ANC 6B Commissioner Kirsten Oldenburg said she “breathed a sigh of relief” when the FHWA released its decision because it meant the work can advance.

Phil Peisch, another ANC 6B commissioner, said dragging out the process would be bad for the community, because construction will make it harder to pass between Navy Yard and Capitol Hill.

“The two things we need to balance are robust oversight and getting this project to start and end as quickly as possible,” he said.

The FHWA found that the 3,800-foot-long tunnel must be rebuilt to maintain the city’s rail system. Turning the single-track tunnel into two tracks will cut delays to commuter and freight trains, CSX says.

Doolittle said that if CSX is able to obtain city permits without delay, construction could begin “in a few months.” It will then last for 2 1/2 to 3 1/2 years, he said.