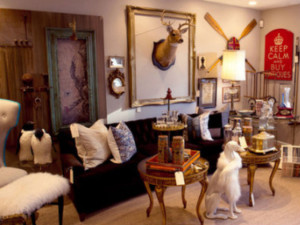 A vintage furniture company that operated out of a carriage house north of H Street NE recently closed because of zoning rules and its owner is now seeking a storefront.

“I had to maintain a certificate of occupancy that this was residential property, and I couldn’t do that if I wanted to operate retail,” Freeman explained. She said she chose to close rather than seek a zoning change.

Freeman said she’s hoping to keep Foundry on the Hill.

“We’re in the process of finding a new home in D.C., and we’re looking feverishly,” she said.

Foundry makes a mix of vintage and modern pieces, many restored by Freeman herself. The company also sells vintage clothes, under the label Foundry Threads. Freeman was co-owner for nearly 20 years of a real estate development firm specializing in historic preservation.

The future store will be similar to the Atlas Court location and the business Freeman runs in Leesburg, The Old Lucketts Store.