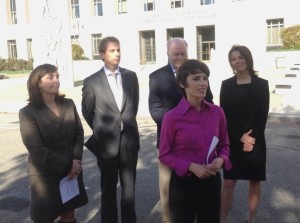 A city watchdog group filed a lawsuit this afternoon to halt the federally-approved reconstruction of the CSX railroad tunnel along Virginia Avenue SE.

As Hill Now reported last week, The Committee of the 100 on the Federal City opposes the project to enlarge and rebuild 110-year-old tunnel because it says the project would be unsafe and it would hurt rail circulation over the long term.

Today at a press conference, representatives of the committee and other stakeholders emphasized that they want to delay construction until the D.C. Council completes its $500,000 study of the area’s railway system next year.

“Our goal is to maintain the status quo, let the D.C. Council complete the D.C. rail plan and then look at the environmental impact statement again after we have all that information,” said Monte Williams, a representative from the committee, after a press conference in front of D.C.’s Federal District Court.

Leslie Alderman, a lawyer for The Committee of 100, said he would file a preliminary injunction to halt any construction today.

The Federal Highway Administration, the principal federal defendant in the case, said it does not comment on ongoing litigation. Council member-elect Charles Allen did not immediately return inquiries about the matter. Advocates have also called on the District Council to pass legislation delaying the project.

“No one is looking to delay for delay’s sake. I think it is very compelling to complete the comprehensive rail plan before starting this project,” said Meredith Fascett, a newly-elected ANC 6D commissioner, who spoke at the conference. “Let’s see what the results are.”