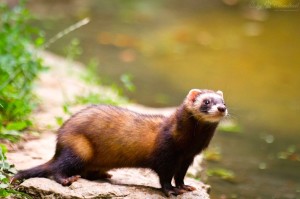 Resident Amanda Scott was walking her dog about 7:45 p.m. Sunday when she saw a brown and black animal scamper underneath a tow truck at 19th and East Capitol streets NE.

“At first I thought it was a rat or squirrel, but with the funny curved back, I figured it out,” she said by email Monday morning.

Another pedestrian flagged down the tow truck driver so he wouldn’t run the animal over, and then the driver and the pedestrian shooed the ferret away.

The animal in the weasel family then scurried west on East Capitol Street NE.

“I haven’t seen it since,” said Scott, who first posted about the sighting to the New Hill East community listserv.

Ferrets are not listed in D.C. Code as animals that can be legally owned or sold in the District.