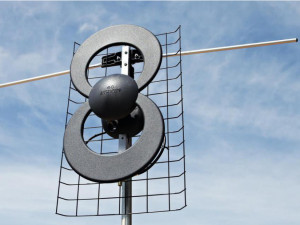 A retro gadget could make a comeback in the living rooms of Netflix users.

A national group representing local TV stations and the company Antennas Direct will hand out 1,000 antennas at Eastern Market on Sunday. Their aim is to reach “cord cutters,” or people who watch TV online and don’t subscribe to cable or satellite TV.

“We’re not saying you should necessarily go cut your cord, but we’re saying that if you have a tight budget or if you’re unhappy with cable service, you have another option,” said Robert Kenny, a spokesman for the advocacy group TVFreedom.org.

Kenny’s group represents local affiliates of ABC, CBS, FOX and NBC, among others. The event Sunday will kick off a nationwide advocacy tour by TVFreedom.org, Antennas Direct and the other co-sponsor, LG Electronics.

The antennas that give free access to a limited number of channels will be given out at a booth in Eastern Market’s North Hall from 1 to 5 p.m. Sunday. They will give away the C2-V model antennas, raffle off an LG flat-screen TV and broadcast local programming on large TVs.