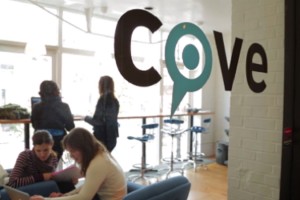 A coworking space on the Hill is planning a move closer to the Capitol.

The company with four “productive spaces” in the District plus one in Alexandria, wanted a Hill location with more foot traffic, said Erin Gifford, Cove’s marketing manager.

“We would really just prefer to be in the hustle and bustle of the Eastern Market area,” she said.

The new space will be smaller, offering only one conference room, Gifford said. But the company believes the layout of the space will be better.  Cove did focus groups with its members on the Hill and found that they wanted more interaction with each other. The new space offers a more open design than the rowhouses did, which Cove representatives think will encourage people to engage.

Cove lets its members, who pay a monthly fee, work in its spaces around the city as an alternative to working in coffee shops, home or offices. They offer unlimited printing and scanning, Wi-Fi and free coffee.

more stories
Previous
Hill Pet of the Week: Brody
Next
1,000 TV Antennas to Be Passed Out at Eastern Market