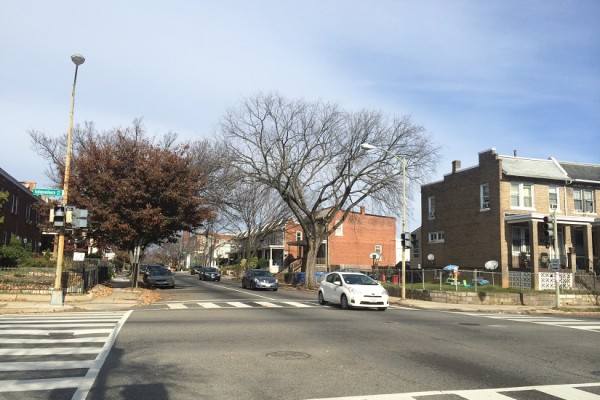 (Updated at 2:10 p.m.) Work to make 17th Street SE safer is now expected to be complete in May 2016, after conflicts between multiple city agencies delayed construction.

The work has been a long time coming on the major corridor for cars exiting I-295, resulting in what Flahaven called a “terrible conundrum” for locals.

ANC 6B commissioners first asked for safety improvements to the street in 2011, and DDOT made their final recommendations for the project in Sept. 2012, Flahaven said. The department did design work on the proposal, but the project stretched on, first because an environmental assessment was conducted, and now due to a lack of coordination among city agencies.

Construction would begin at the end of Feb. 2015 and last through May 2016, according to DDOT’s timeline. This timeline differs from the one most recently released by the department, Flahaven said.

Complicating the project, Dahir said, is separate DC water construction expected along 17th Street in both the northeast and southeast quadrants. Starting in January, DC Water will install a new 20-inch water main along the road, from C Street NE to Potomac Avenue SE. The main will replace an existing 8-inch main that was installed in the 1930s, said Jill McClanahan, DC Water’s construction outreach coordinator. That work is expected to run through April 2016.

Locals asked the two agencies coordinate their plans to take advantage of construction zones already in place and minimize disturbances to residents.

Denise Krepp, an ANC 6B commissioner-elect, asked the agencies to give monthly updates on their construction and to give advance notice if any nighttime construction could occur.

“I realize that there is slippage, I realize that you might have something to work out with other agencies,” she said. “That’s not my problem. I am just making sure that my neighbors and my constituents have the ability to get updated information.”

Pat Taylor, a resident on the 300 block of 17th Street SE, asked officials to consider what would happen to traffic once construction was underway and after the projects were completed. She said measures should be taken now to anticipate more cars going onto side streets, like installing speed bumps.

“With this project, you’re going to hopefully change the traffic patterns,” she said. “I’d say it’s premature to start talking about how the traffic is going to spill over onto the side streets and what kind of traffic problems we’re going to have.”

The 17th Street SE project would make a number of changes in both the northeast and southeast quadrants.

North of East Capitol Street to Benning Road NE, the plan is to provide parking on both sides of the street. A shared bike lane will be added to the west side of the street. Additionally, a roundabout is planned for the E Street NE intersection.

South of East Capitol Street, the major change will be to narrow the street to one traffic lane. Parking will be available on the west side of the street, though the east side will become open to parking during Robert F. Kennedy Stadium events. There are also plans for a raised crosswalk on the north side of the D Street SE intersection.

Construction on the streets in both quadrants will include driver feedback signs, new pavement markings, signage and lighting, curb extensions, traffic signal upgrades and resurfacing.

More construction is in the works, DDOT said.

Proposed construction on 19th Street SE from Potomac Avenue SE to Benning Road SE will upgrade pavement markings and add a shared northbound bike lane along part of the road. That could be completed by the end of March 2015, weather-permitting.