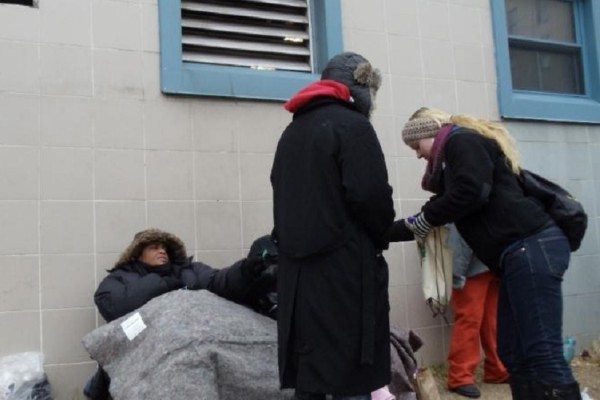 (Updated at 2:05 p.m.) You can train to help homeless people survive the winter.

The Capitol Hill Group Ministry has created a hypothermia emergency response team and is seeking volunteers.

Since the beginning of November, the Seward Square-based nonprofit has sent pairs of helpers onto streets citywide to reach out to homeless people in the cold.

“The purpose for them isn’t to be superheroes, but to recognize when someone needs help,” she said.

Since November, the official start of hypothermia season, the group has sent volunteers out six times. In some cases, the volunteers have called the city’s emergency hotline to get people into shelters for the night. For people who don’t want shelter, volunteers hand out blankets, hot chocolate and other supplies.

CHGM staffers got the idea for the response team last winter, Parnell said. The multi-faith group that aids people with low incomes received several calls from concerned locals about how to help the homeless they saw. CHGM worked with homeless people during the day but didn’t have staff who could go out at night, when need was highest.

The group has hosted two formal training sessions so far, resulting in 22 people from all over the Washington, D.C., metro area being on call to help on hypothermia alert nights. These nights are declared when temperatures fall below 32 degrees with wind chill. New volunteers will go through one-on-one training sessions and shadow current volunteers. Those interested in volunteering can reach Parnell at 202-544-0631 or [email protected]

“Everybody has a right to shelter, especially when it’s 32 degrees or below,” she said.

If you see a homeless person who appears to need help on a cold night, email the United Planning Organization at [email protected], call the shelter hotline at 1-800-535-7252 or call 311.

more stories
Previous
Less Than an Inch of Snow Now Expected on the Hill
Next
Hill Pet of the Week: Jake