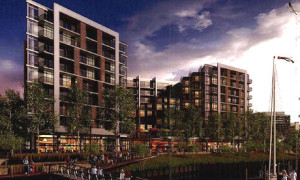 Construction is moving forward on an apartment building just south of Nationals Stadium, and the developer is hosting a pig roast to celebrate.

Developer MRP Realty will hold a party and pig roast on Tuesday at the 1st Street and Potomac Avenue SE residential and retail building that will be called The Riverfront.

“There has been a 15-year process to unlock some vertical space on this property,” MRP Realty Vice President John Begert said, referring to difficulties in the zoning process. “This will be a spike-the-football kind of event.”

Begert described the pig roast as “something different” to attract attendees. The ceremony for the nine-story building with a rooftop pool will take place at 10 a.m. Tuesday at 25 Potomac Ave. SE site.

The 305-unit building is slated to be complete in two years, though some units will open earlier. The project will extend the pedestrian boardwalk along the Anacostia River.

The $65 million project won zoning approval as part of a project to construct four buildings on the parcel, but Begert said there are currently no plans in motion to build the other three.