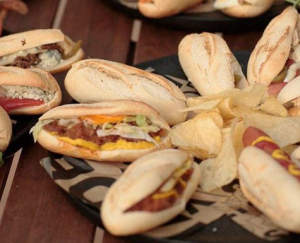 Low-cost food and drinks are on the way to Navy Yard.

The Spanish chain restaurant and bar 100 Montaditos appears close to opening its first location in the District. Signage for a grand opening this month is now posted outside 300 Tingey St. SE near 4th Street SE.

The restaurant’s menu of 100 Spanish sandwiches on baguette-like bread will include classics like tortilla espanola and serrano ham, plus “premium” selections like a sandwich that combines anchovies, brie cheese, piquillo pepper and arugula.

A grand opening special will be in effect, offering $1 sandwiches, $2 regular beers and $3 premium beers, a sign says.

The company, which has locations in Arlington and Bethesda, was founded in 2000 in Spain. The Navy Yard location of 100 Montaditos will “aim to recreate the atmosphere of a 19th century Spanish tavern, according to a description on the Capitol Riverfront website.

Representatives did not immediately return inquiries about when the restaurant is expected to open.