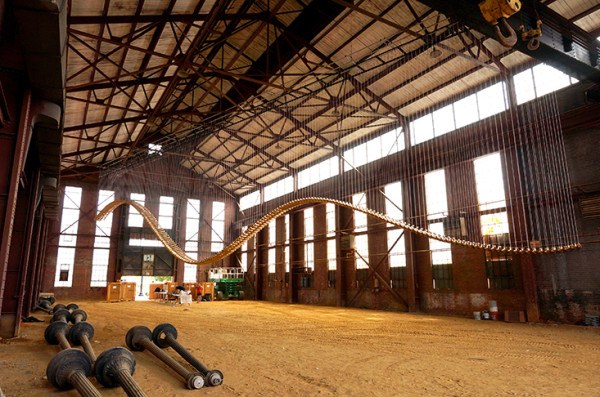 If you want to see the public art in a historic Naval building, act fast.

“Bridge,” a sculpture by Glenn Kaino, will close to the public on Saturday, according to The Yards DC.

The piece consists of a long wave of suspended golden objects that stretches through historic Building 170 at 200 Tingey St. SE. A closer look reveals that the piece is in fact composed of casts of Olympian Tommie Smith arm when he gave the Black Power raised fist salute at the 1968 Olympics.

The work is meant to address “social justice, equality and the advancement of a social cause,” an artist’s statement says.

The project is part of 5 x 5, a series of 25 temporary public art exhibits funded by the District that have been on view since September.

Property developer JBG Companies did not immediately respond to an inquiry about what will happen next to the building. A “retail pavilion” of 7,000 to 11,000 square feet is eventually in the works for the space, according to the Capitol Riverfront Business Improvement District website.

Photo via The 5 x 5 Project