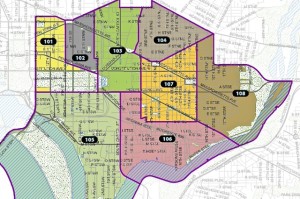 Top Metropolitan Police Department officials will be in the neighborhood this week to talk about crime and safety issues.

Total crime is up in the First District — which covers Capitol Hill, Hill East, the H Street NE area and Southwest. A total of 5,981 crimes were reported this year through Dec. 7, compared with 5,565 in the same period last year, marking an increase of more than 7 percent, Crime Map data shows.

The overall number of violent crimes reported dropped in the past year, with a decrease in homicides, and robberies that did not involve guns.

There was a nearly 10 increase in property crimes, with 5,368 this year, compared with 4,883 last year, the data shows. The number of reported burglaries dropped 38 percent (from 396 to 287), but the number of reported thefts, thefts from cars and stolen cars all rose, at 10 percent, 16 percent and 27 percent, respectively.