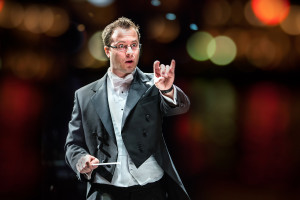 Is there a piece of classical music you’ve been dying to hear?

Let the Capital City Symphony know by Friday and you’ll have a chance at hearing it performed live at the Atlas Performing Arts Center on H Street NE. The community symphony will perform about 10 audience selections during a Feb. 27 performance.

“In classical music, audience members never have a say in what they hear,” said John Devlin, the symphony’s associate conductor. “I figured, why not just ask them?”

Audience members will each introduce their pieces. A video they will design with film artist Tim McLoraine will play during the symphony’s performance.

“The focus of my thinking about classical music lately has been about how to modernize it,” said Devlin, who is 29 years old. “This type of performance is one where people will feel a different type of connection.”

During the first half of the performance, the symphony will perform “Les Illuminations,” a piece by composer Benjamin Britten. The Capital City Symphony will stage it with a lead male soloist who interacts with a video projection. (The University of Maryland hosted a performance of the piece this way two years ago. A recording is available here.)

The performance will be a “demonstration of all you can accomplish with video projection,” Devlin said.

The Capital City Symphony will also perform early next year with a go-go band.