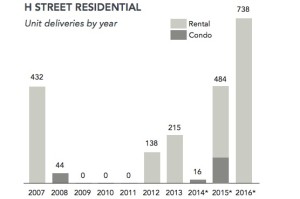 More than 1,200 housing units are under construction on the H Street NE corridor and more are on the way, a report issued yesterday (Tuesday) says.

After a total freeze in the construction of rentals and condos on the corridor from 2009 through 2011, an estimated 1,238 units are being built now, according to the new development report from the Washington D.C. Economic Partnership. These homes are all expected to be ready by late 2016 or early 2017.

The 92-page document highlighted growth citywide, with this data on Ward 6 neighborhoods: