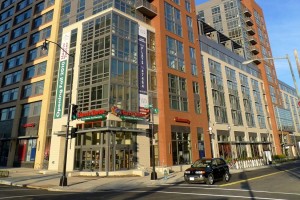 The Harris Teeter store on 1st Street is closed indefinitely after a District health inspector and shoppers spotted mice.

A manager reached by phone today (Friday) said store officials are aiming to reopen the store early next week, but no firm date has been set.

In an email sent to customers, Harris Teeter said it is stripping every case and shelf in the store to “thoroughly clean, sanitize and restock product.” Products that don’t meet the store’s guidelines will be discarded.

“We are doing this out of an abundance of caution to ensure we are operating at the highest possible standards,” the store’s customer relations team wrote. They did not immediately respond to an inquiry.

The 1201 1st St. store closed Monday after a District Department of Health inspector found a live mouse in a storage container.

Inspectors found a number of violations, and saw three mice in a trap near a refrigerator, rodent feces on food equipment and flooring in the pizza area and on shelves in the bakery area.

Additionally, inspectors reported flies in the deli, produce and meat prep areas, unclean surfaces on cooking equipment in prep areas and containers of Oscar Meyer deli meats that were past the sell by date.

The store was cleared to reopen on Wednesday, but Harris Teeter chose to close and sanitize the store, a manager said, declining to provide his name.

NoMa resident Aisha van Ter Sluis spotted a mouse at the store on Wednesday night, shortly after Harris Teeter reopened. The local activist, who lives in an apartment above the store, was shopping when she saw a mouse scurry past her in the cereal aisle. She left her cart and walked out.

She said she had repeatedly seen vermin in the store since moving into the building in Feb. 2013. Despite the convenience of having the Harris Teeter an elevator ride away, she said she often opts to take the Red Line all the way to the Whole Foods in Tenleytown.

“You find bugs or you see a mouse and you say you’re never going back, but that lasts for two months, and then you slowly start to pick up a few things,” she said. “It’s just too convenient.”

What worries van Ter Sluis most is the idea that the vermin could get into her apartment building.

“If they have this huge warehouse infested with mice, how long until that gets to where we live?” she said.