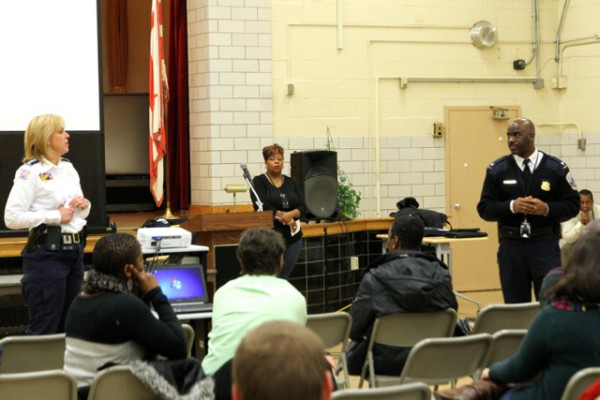 Philip Johnson, a financial consultant who lives on the 800 block of 5th Street NE, said his 23-year-old son gets questioned by police an average of once a week when he’s home from college. Police stops of young black men seem to have increased as the H Street NE corridor has drawn newcomers, Johnson, 71, said.

“My son has to show his ID almost each time his feet hit the street,” said Johnson, who Lanier said she invited to speak at the meeting after they talked for an hour-and-a-half by phone.

“The colonists have arrived and we have an occupying army enforcing the rules,” he said.

Lanier said newcomers to the area are misinterpreting everyday scenarios as crimes, like reporting drug deals when they see young black men standing on a corner.

“You have a lot of people here who haven’t lived in an urban neighborhood who are calling police for a lot of new things,” she said at the meeting held at J.O. Wilson Elementary School.

Johnson agreed with that assessment.

“A couple of guys walk through an alley like they’ve done their whole lives, and the newly arrived neighbors think something untoward is happening,” he said.

Lanier said officers will reduce unnecessary stops by getting to know residents one by one, and by getting more officers out of patrol cars and onto bikes and Segways.

“The officers should know who lives in the neighborhood,” she said. “You see a car window open when it’s raining and you know whose door to knock on … That’s what a beat officer is.”

Brown defended police and said officers make stops based on information reported to them about suspects.

“The majority of the time, we’re responding to a description we received,” he said.

Mozella Boyd Johnson, another 5th Street NE resident, said an officer has repeatedly come to her home this fall, demanded information about her family and refused to provide his name. Her new neighbors apparently accused the family of selling drugs.

“These new people just got here two months ago, and we’re getting all this drama,” Johnson said.

Lanier said the treatment of Johnson’s family by a bike officer is under investigation. She promised continued conversations with locals about racial profiling.

Philip Johnson said he was open to a one-on-one meeting between police and his family, as Lanier suggested, but that he wasn’t sure a sitdown would prevent his son from being stopped.

“[Lanier] is saying all the good things, but the officers on the beat are not operating like she says.”