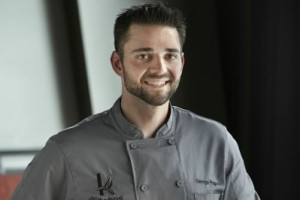 The D.C chef in the running to win a “Top Chef” title will train a small group of cooks on the Hill.

George Pagonis of the Greek restaurant Kapnos will teach a Northern Greek cooking class at the Hill Center this spring, the institution announced.

Pagonis — who appears on “Top Chef: Boston” episodes airing now — will show about 18 cooks how to make easy Greek dishes.

“I’m thinking about doing an Easter-inspired dish. Maybe roasted leg of lamb and moussaka,” he said, noting that he’ll look to spring vegetables for inspiration for the March 7 class.

“A lot of the dishes that we do are meat-inspired. A lot of roasted meats and hearty filo pies,” he said.

Appearing on “Top Chef” has been a great experience, the Alexandria resident and fluent Greek speaker said.

“The hardest experience has been to keep a secret this whole time,” he said about episodes that were filmed this spring. “I was just counting down the days and the weeks until it aired.”

Signups for the cooking class at the Hill Center (921 Pennsylvania Ave. SE) can be made online. The three-hour class costs $85 per person.