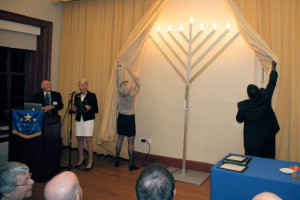 The Christmas tree near Eastern Market will be joined tomorrow night by a 9-foot-tall electric menorah.

The new menorah will be lit on the first night of Hanukkah by the local Jewish group Hill Havurah and the Capitol Hill Business Improvement District.

Since the BID began lighting a Christmas tree near Eastern Market about eight years ago, people inquired about when the BID would light a menorah, marketing director Kelly Maslar said.

“This is going to be a new tradition,” she said.

A blessing of the menorah will take place at 5 p.m, at 8th Street and Pennsylvania Avenue SE. Latkes from Ted’s Bulletin will be given out, and the BID’s “Men in Blue” workers will serve jelly doughnuts, hot chocolate and coffee.

The BID bought the menorah earlier this year as a tribute to Paul Pascal, who stepped down as board chairman in February, Maslar said.