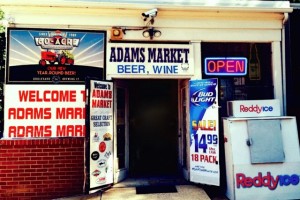 A man armed with a revolver held up the corner store at 7th and F streets NE yesterday morning (Sunday) and First District police arrested a suspect within hours.

Adams Market at 700 F St. NE was robbed at about 8:20 a.m., police said. The suspect stole several hundred dollars and fled the scene in a maroon BMU SUV, according to police. No one at the store was injured.

Police tracked the SUV to Southeast D.C. and arrested a suspect at about 1 p.m., police said. Some of the stolen funds were recovered.

Adams Market has operated for more than 20 years and calls itself “more convenient than a grocery store, friendlier than a convenience store.”