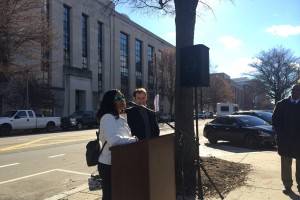 The District Department of Transportation installed a record nine miles of new bike lanes this year and more are on the way.

DDOT officials celebrated the milestone this morning (Wednesday) at a ribbon-cutting ceremony for the new 4th Street bike lanes. The lanes stretch from Pennsylvania Avenue NW to School Street SW, providing a connection to the waterfront.

“With the 4th Street bike lanes, residents and visitors can bicycle from National Ballpark, across the Mall to downtown and beyond,” DDOT Director Matthew Brown said.

This year, in Ward 6, the department installed protected lanes in NoMa along 1st Street NE, plus lanes on 11th Street SE. The District also did resurfacing projects on G and I streets NE to prepare for more bike traffic once the D.C. Streetcar starts operating on H Street NE.

No plans have yet been made for what bicycle projects DDOT will tackle in 2015, but proposals will be reviewed in the coming weeks, said Sam Zimbabwe, DDOT associate director. The department takes into account demand, safety concerns and the nature of the work that needs to be done, he said.

“We want to continue this momentum,” Zimbabwe said.

The number of District residents who commute to work by bike has grown to 4.5 percent, or 15,000 people, DDOT says. This percentage is likely higher on the Hill, where many residents use bikes as their main mode of transportation, Zimbabwe said.

Ward 6 has about 18.8 miles of bike lanes within its boundaries, DDOT said.