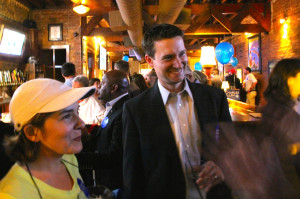 District Council members and Mayor-elect Muriel Bowser will take their oaths of office then at the Walter E. Washington Convention Center (801 Mount Vernon Place NW). The ceremony is open to the public and will begin at 9:30 a.m.

Afterward, Allen will host the open house at his office in the Wilson Building (1350 Pennsylvania Ave. NW), Suite 406. People can RSVP to the event here.

Laura Marks, who worked as chairwoman of Allen’s campaign, said the event is a tradition for Council members and gives people who attend the swearing-in ceremonies something to do between when Council members take their oath in the morning and ANC commissioners and State Board of Education members do in the afternoon.

Allen will get the chance to show off his new office and meet with people, she said.

“Over the last several weeks, I’ve been working during the transition period to ensure I will hit the ground running, meeting with education, public safety, housing and small business leaders,” Allen wrote in his invite.

Allen will sit on the Education, Transportation and the Environment, and Business, Consumer and Regulatory Affairs committees.

Also in his invite, Allen said he plans to announce his staff in the coming weeks.

more stories
Previous
Ethiopic, Montmartre Make Top Restaurant List
Next
Meet the Marines on Duty at the Barracks on Christmas