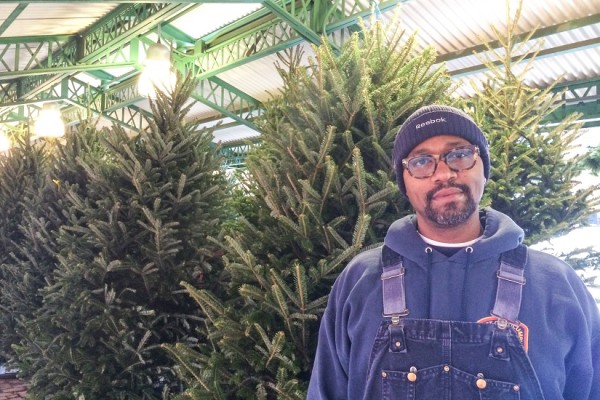 Elliott Warley Jr. never expected to go into the Christmas tree business. But once a year, he takes a month off work to sell trees outside Eastern Market.

After all, it’s a family tradition that stretches back more than three decades.

His father, Elliott Warley Sr., started the stand in 1983 after he bought a farm in West Virginia.

Warley Sr.’s accountant told him he could pay lower taxes on the land if he started a business. When he noticed some firs on the property, he decided to try his hand at selling Christmas trees.

Since its inception, the younger Warley — now a D.C. firefighter — has toiled at the stand. He was a teenager when his father started the business. He concedes that at the time, he would have rather hung out with his friends.

Three years ago, when it came time to take over the business for his father — who worked in the president’s Office of Administration — Warley jumped at the chance.

Warley and his crew can be found outside Eastern Market’s North Hall every year from Black Friday to Christmas Eve. It isn’t always bright and cheerful. Business was slow this year. Last year was his best year selling trees, and this year may be his worst, he said.

One pitfall of selling trees throughout the holidays is Warley has gotten little time to enjoy the festivities himself. Still, he looks forward to every time he can make a sale.

“I like giving somebody a nice tree, something they can really enjoy,” he said.

Warley expects to sell trees outside Eastern Market for as many years as he can. When he’s done, he knows who’s next in line: his 24-year-old son.

“He doesn’t know that yet,” Warley said. “And he probably doesn’t want to. But I didn’t want to do this at first either.”