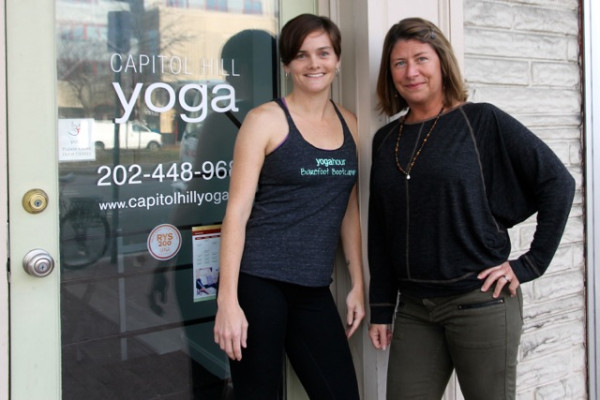 Hill Now regularly publishes profiles of locals — from longtime residents to newcomers, from government officials to ordinary folks. Know someone we should feature? Email us at [email protected].

Ward 6 residents Stacey DeGrasse and Betsy Poos both began taking yoga classes as a counterbalance to their busy lives.

Now in their fifth year on Pennsylvania Avenue, the co-owners of Capitol Hill Yoga said they hope to bring more serenity to the lives of locals.

“Yoga has been so helpful for me,” said DeGrasse, who also works full-time as an FDA research biologist. “With the fast-paced, high-pressure careers so many of us have here, we want to provide that.”

She and Poos, a former Hill staffer and consultant, opened the garden-level studio at 641 Pennsylvania Ave. SE after the studio where they both previously taught closed. Earlier this month, their studio was named Fitness and Exercise Service of the Year by the Capitol Hill Chamber of Commerce.

Yoga practitioners can spend Jan. 1 with DeGrasse, 42, and Poos, 36, in a special “New Year’s Day Awakening” class. The goal of the 2 hour 15 minute class is to “to deeply set your intention for the year,” DeGrasse said.

Here’s what Hill Now learned about them in our last Meet the Neighbors interview of the year.

Live: DeGrasse lives on the waterfront, a few blocks east of Nationals Park, with her husband, two cats and “a lot of saltwater fish and invertebrates.” Poos lives near Tyler Elementary School with her husband, 4-year-old daughter and a Boston terrier named Bodhi, which means enlightenment. “I live on a pretty special block. Up and down, I know every neighbor,” she said.

Favorite Glimpses of Old D.C.: Poos, a runner, said glimpses of the Capitol Building give her additional spring in her step. “That stretches me all the way down the Mall.”

What Changes They’d Like to See on the Hill: More opportunities for small business owners, like additional storefronts and leasing opportunities, DeGrasse said. She would also like to see more community involvement in local politics.