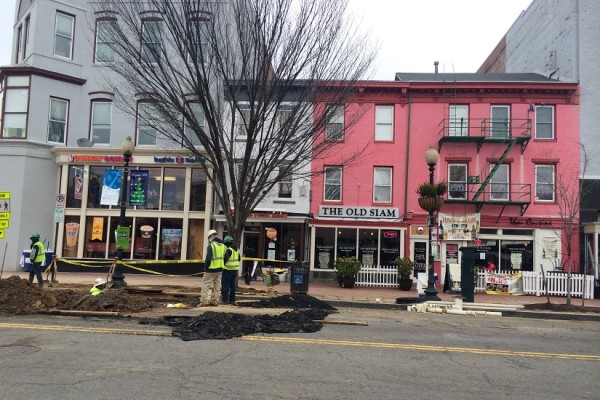 D.C. Water says the broken water main on 8th Street SE has been fixed, but the Thai restaurant The Old Siam is still coping with damage.

The basement of the 406 8th St. SE restaurant was inundated with two feet of water because of the water main break Christmas Eve morning, manager Nikkie Likitvanichkul said today (Monday). The flooding broke the heater for the entire building, and forced the restaurant to close for most of Wednesday.

“We probably lost a lot of business,” Likitvanichkul said as crews worked again this morning — just feet from The Old Siam’s front door — to repair the 12-inch pipe that flooded Barracks Row.

The Old Siam is open today but on Wednesday had to stay closed until 5 p.m. They usually open at 11:30 a.m. The Thai and sushi restaurant was able to operate for three hours before they were forced to close again.

The restaurant doesn’t yet know how much damage was done and is awaiting an insurance assessment, Likitvanichkul said.