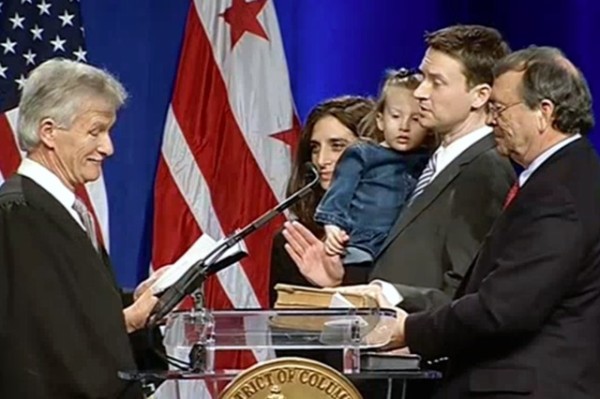 The new Ward 6 councilman has taken the oath of office.

Hill resident Charles Allen was sworn in as the D.C. Councilman for Ward 6 this morning (Friday). With 2-year-old daughter Cora Neal in his arms and wife Jordi Hutchinson alongside him, Tommy Wells’ former chief of staff took office about 11 a.m.

He spoke about the symbolic importance of the district.

“From Shaw to Southwest, from H Street to Hill East, from NoMa to Navy Yard, and across Capitol Hill, Ward 6 is a snapshot of our city,” he said. “It represents and celebrates our diversity, and I believe it reflects not only the District’s tremendous success stories, but it also reflects the challenges we must confront.”

Allen told an anecdote about meeting a woman on the street on Election Day, as he and his family walked to the polls.

“Wait, did I just vote for you?” the woman called out after him.

“I sure hope so,” Allen replied.

“I’m counting on you to do what you say, and represent my family,” the woman replied.

“I said I’d work hard to do just that,” Allen recounted.

Three or four days later, Allen received a card in the mail. “Dear Mr. Allen, You did it,” it said. The note was signed, “Peace, the person you met on 15th Street as you were heading to the polls.” The encounter reminded Allen of his deep responsibility, he said.