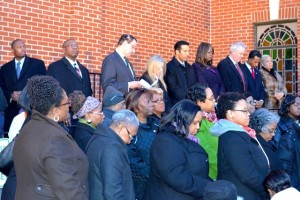 Plans are advancing to name part of Florida Avenue NE after the 71-year-old woman killed there in a hit-and-run in 2013.

Whitfield died March 21, 2013 after a man driving an SUV plowed into her as she crossed Florida Avenue in the crosswalk. She had just left New Samaritan Baptist Church (1100 Florida Ave. NE), where she was an usher. The Mississippi native served lunch to students at the Sidwell Friends School for 44 years and retired in 2008, according to a letter from ex-Mayor Vincent Gray.

“Designating the 1100 block of Florida Avenue as Ruby Whitfield Way will not only serve to honor Mrs. Whitfield’s life but will serve as a reminder that a lot of work still needs to be done to ensure that our streets are safe for pedestrians,” McDuffie said today at the first legislative meeting of the two-year Council period.

The driver who struck Whitfield, Joel Bromwell, pleaded guilty in May 2013 to driving under the influence and involuntary manslaughter. The 32-year-old Annapolis resident faced up to 30 years in prison but was sentenced in Aug. 2013 to just four years.

A friend of Whitfield’s who saw her get hit and dragged by the SUV told The Washington Post she thought the sentence was too lenient.

“That’s all he got? That’s nothing for taking a person’s life in a hit-and-run,” Jessie Thaxton said. He would get more than that for killing an animal.”

Bromwell, who was a restaurant manager without a prior criminal record, is due to be released in Sept. 2016, Federal Bureau of Prisons records show.

The bill was referred to the Council’s Committee of the Whole.

more stories
Previous
Capitol Hill Copes With First Snow of the Year
Next
Capitol Hill Real Estate Highs in 2014, Plus Predictions for 2015