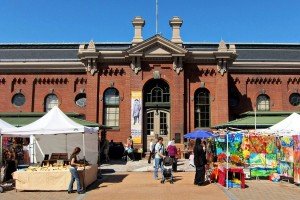 A plan seems to be inching along to improve parking near Eastern Market on weekends.

District Department of Transportation representatives will speak at a community meeting tomorrow night (Wednesday) about ideas to fix the weekend parking clog, reviving discussions that have gone on since at least 2011.

Fixing parking problems at Eastern Market — an area that, unlike much of the District, is less crowded on weekdays but inundated on weekends — has long been a priority for ANC 6B, transportation committee chair Kirsten Oldenburg said. The commission pushed for expanding performance-based parking, which allows the city to charge higher costs during times of peak demand. Such systems are already in place around Nationals Park and on the H Street Corridor.

However, DDOT failed to act on an expansion of performance-based parking, even as District Council members joined in support for the plan, Oldenburg said. The department told ANC 6B they could not expand the performance parking plan without additional review.

“It was a very frustrating process for all of us,” she said.

Still, Oldenburg said she looks forward to hearing what DDOT has to say and to start working toward a solution.

“[The meeting] will begin plans for the coming months,” she said.

The meeting will be held tomorrow at 7 p.m. in room 314 of the Hill Center, at 921 Pennsylvania Ave. SE. The DDOT representatives expected to speak tomorrow night declined to discuss the presentation they’ll give.

more stories
Previous
Capitol Hill Real Estate Highs in 2014, Plus Predictions for 2015
Next
Wind Chill Could Drop Below Zero Tomorrow