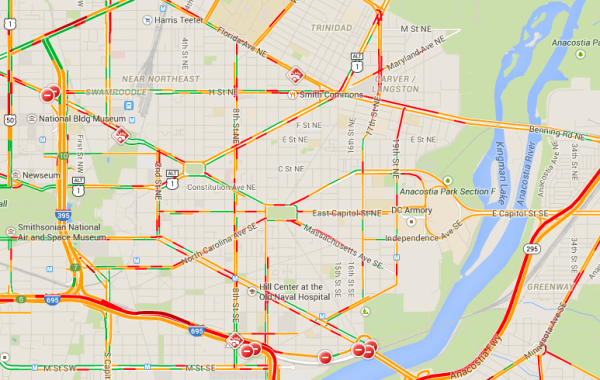 (Updated at 9:45 a.m.) Schools are open but some roads are closed as more snow falls on Ward 6 than forecasters expected.

A WTOP weather reporter measured 3.5 inches of snow at the Capitol as of 9:30 a.m. The National Weather Service now expects 2 to 4 inches of snow to pile in the District. Only 1 or 2 inches were predicted as of yesterday afternoon.

The heaviest snowfall is expected through 11 a.m. and then should taper off. Temperatures are in the low to mid-20s, and winds are as strong as 10 mph, the NWS says.

A winter weather advisory is in effect for all of Washington. “Be prepared for snow-covered roads and limited visibilities,” the NWS says.

H Street NE between 3rd Street and North Capitol Street NE was closed earlier this morning but has since been reopened.

Orange and Silver Lines trains headed toward Largo Town Center and New Carrollton are delayed because of a malfunction at the Rosslyn station.

Bus riders are advised to allow for additional travel time or use Metrorail as an alternative, as buses are delayed by as much as an hour. Buses being detoured because of road closures include the D6, E2, E4, G2 and L2. The E6 has been suspended. All buses are running on “moderate snow routes,” WMATA says. That means detours and increased wait times on some lines. For information on every line, see WMATA’s website.

All public schools and government offices are open.

Police advise drivers to be cautious and maintain safe speeds and distances from other cars. Pedestrians are advised to be careful, too.

A little snow won't stop us! #DCStreetcar will maintain normal operations even during snowy weather. pic.twitter.com/0MEmxW7cY8

First snow of the year. Be safe out there. Let me know if you see problems & we'll work with city agencies to tackle them.