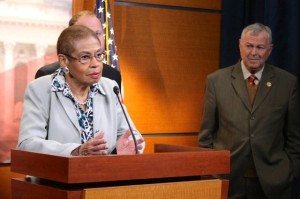 Norton announced this afternoon that she has asked NPS Associate Regional Director Peter May to halt plans for a statue of Revolutionary War hero Francis Marion until May meets with her.

“Parks owned by the NPS but used by neighborhood residents require respect and deference,” she said in a statement. “After hearing from constituents, an increasing number of whom have children and make maximum use of our parks, I am concerned that NPS is rushing through this process without sufficient courtesy and respect for the affected community.”

NPS staff will meet with Norton next week to give an update on the project and multiple public comment sessions, an NPS spokeswoman said Friday afternoon.

Congress authorized NPS in 2008 to create a memorial to Marion. As Capitol Hill Corner reported, six locations on Capitol Hill are being considered as possible sites for the memorial, including Marion Park and Garfield Park.

Hill residents said another federal memorial in the area would take up valuable park space, and some objected to creating a monument to a plantation owner and slaveholder, as The Washington Post reported.

“We appreciate that Francis Marion is a hero to some, but he has a controversial past for others,” Norton said.

Once a site for the monument is chosen, the design selection process will begin, with more opportunities for public comment.

more stories
Previous
Person Stabbed on 19th Street NE
Next
The Most Walkable Neighborhoods in the D.C. Area