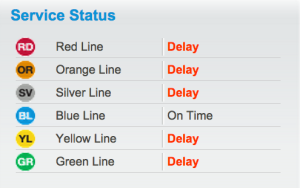 (Updated at 10:40 a.m.) Commuters faced another frustrating morning. Trains on every line but the Blue Line were delayed as of 9:05 a.m.

Trains were held up on the Orange and Silver lines because of a broken rail at East Falls Church, and on the Red Line because of “weather-related car equipment problems” and a disabled train near the Grosvenor-Strathmore station. Yellow and Green line trains were delayed because of a cracked rail outside the Prince George’s Plaza station.

Orange and Silver line passengers should expect delays of about 20 minutes, WMATA said.

Red Line: Expect delays in both directions due to weather-related car equipment problems.

Red Line: No longer single tracking. Residual delays continue in both directions due to an earlier train malfunction outside Grosvenor.

Green/Yellow Line: Repairs completed. No longer single tracking. Trains are on or close to schedule.

Many riders were especially frustrated after they faced major delays yesterday morning.

Haven't had a decent day on metro all week. These delays are getting old. Every. Damn. Day. #wmata

Several minute holds at every station on the Orange line within DC. #metrodelays #wmata @unsuckdcmetro @wmata

#wmata Thanks for making me use my personal leave due to your ineptness today. Appreciate the stellar commute!

Will I ever get to work on time again? Cracked rail outside of East Falls Church. #unsuckdcmetro #wmata

OL riders should just consider walking thru the fare gates and not paying this morning. Protest peak fares and poor service. #wmata