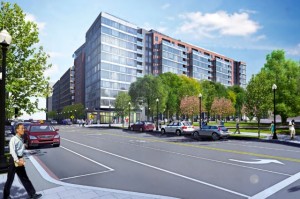 The redevelopment of 4th Street SW is advancing.

An 11-story apartment building at 1001 4th St. SW is slated for completion in mid-2016, the developer announced in a project update.

The building will include 365 market-rate apartments, a rooftop pool and a landscaped courtyard, the statement from Forest City Enterprises said.

ANC 6D voted in favor of Waterfront Station, the planned unit development that includes the building.  in May 2013, the blog Southwest…The Little Quadrant That Could reported. The ANC asked that Forest City create more retail and limit disturbance to Southwest Duck Pond.

More than 4,400 square feet of retail space is planned at the base of the building, Office of Planning documents show.