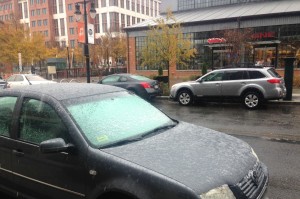 (Updated at 9:25 a.m.) This week’s nasty weather is affecting the schedules of schoolchildren and federal workers, and making roads and sidewalks treacherous.

D.C. public schools are opening two hours late because of the freezing rain this morning (Monday). Federal employees are also opening on a two-hour delay. District government is operating under normal hours.

“Nothing is more important than the safety of our residents,” Mayor Muriel Bowser said in a statement. “Our snow team was prepared for the anticipated inclement weather, and determined that opening the District government on time to serve our residents was the right choice. In the best interest of our children, we have chosen a two-hour delay for DC Public Schools to ensure that our youth are completely safe during their commute to school this morning.”

Circulator service is delayed on the Potomac Avenue Metro-Skyland route. Some flights are cancelled and delayed at Ronald Reagan National Airport and other airports in the region. The airports advised travelers to contact their airline.

A freezing rain advisory was in effect for Washington until 9 a.m. “A thin glaze of ice will likely form on untreated roads [and] sidewalks,” a notice from the National Weather Service said. The forecast calls for temperatures in the lower 30s and winds up to 10 mph.

Freezing rain was expected to become rain by mid-morning, the notice said.

Metro trains were running on schedule as of 9:25 a.m., WMATA said. Officials are reminding commuters to be careful on slippery platforms and escalators.