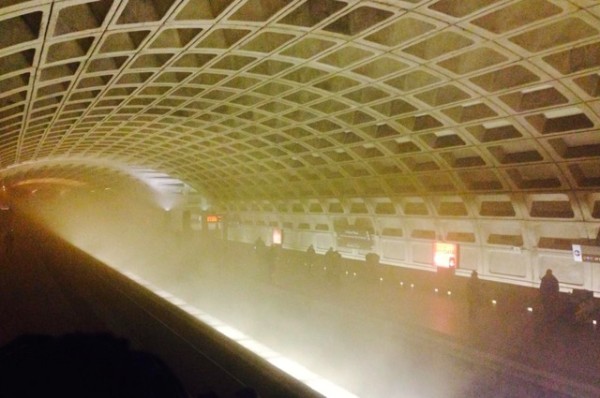 (Updated at 8:25 p.m.) One Metro passenger is dead and five people were injured after smoke filled a Metro tunnel near the L’Enfant Plaza station today before rush hour.

After smoke filled the station, the L’Enfant Plaza stop was evacuated about 3:20 p.m. Monday and then shut down, Metro Transit Police said. The incident disrupted Metro service on five of the system’s six lines for more than five hours.

L’Enfant Plaza has reopened for service on the Blue, Orange and Silver lines, Metro said in an update about 8:10 p.m. Green and Yellow line service will remain suspended for the rest of today between Gallery Place and the Navy Yard and Pentagon stations.

Riders panicked, prayed and banged on the train doors as they waited on the smoky train for about an hour, passengers told The Washington Post. Dramatic photos posted online show a dark train car, and passengers huddled on the ground and walking through a tunnel.

Mayor Muriel Bowser said she will “continue to keep the District’s resources available in the aftermath of the incident.”

“We are all saddened by today’s fatality aboard the Metrorail, and our thoughts and prayers go out to the family of the passenger who passed way,” she said in a statement.

“The source of the smoke has not been identified,” WMATA spokesman Dan Stessel said on NBC. Firefighters found smoke but no fire, a fire department spokesman said earlier this afternoon.

The National Transportation Safety Board has taken over the investigation, Metro Transit Police announced about 7:20 p.m.

That was easily the worst metro ride of my life pic.twitter.com/a5EnGeRzMQ

Yellow Line riders travelling between Virginia and DC should use the Blue Line as an alternate.

There was a small debris fire on the tracks of the station less than a week ago, as Hill Now reported. That fire at about 10:30 a.m. Wednesday was extinguished quickly, WMATA said.