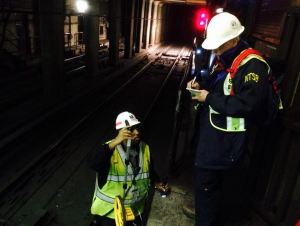 What the National Transportation Safety Board called an “electrical arcing event” caused the smoke that filled a Metro train yesterday, a preliminary investigation found.

NTSB chief investigator Michael Flanigon said  late Monday night that an electrical malfunction involving the third rail and power supply cables to that rail caused the smoke. Water along the tracks might have contributed to the problem.

The south-bound Yellow Line train stopped about 3:20 p.m. yesterday about 800 feet past the L’Enfant Plaza station.

“We don’t know exactly why it stopped,” Flanigon said last night, saying there was smoke but no fire.

One woman was killed and more than 80 passengers were transported to area hospitals with respiratory problems and other health issues. The incident disrupted Metro service on five of the system’s six lines for more than five hours, and forced service changes today.

Firefighters did not immediately enter the tunnel to help riders because they did not know whether the third rail had been deactivated, interim D.C. Fire and EMS chief Eugene Jones told The Washington Post.

He said the delay was “nothing like” the hour-long wait that trapped passengers described.

“Once we worked with Metro to ensure the power to the track bed was off, we made entry and made rescues,” Jones told the Post.

In the meantime, passengers choked, prayed and passed out.

The NTSB will continue to examine equipment and interview people who were trapped to determine the cause of the malfunction, officials said.