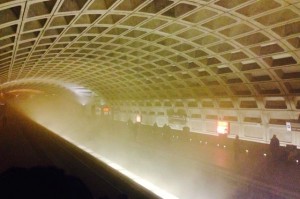 (Updated at 10:25 a.m.) A preliminary report on emergency calls and dispatch times for the Metro incident that killed a woman on Monday suggests confusion and delays.

The city released this morning the first minute-by-minute account of the information Metro and D.C. Fire and EMS had while commuters were trapped. Heavy smoke in the L’Enfant Plaza Metro station was first reported at 3:22 p.m., the call log distributed by the Office of the City Administrator shows. Firefighters arrived nine minutes later, at 3:31 p.m.

The call log does not list when firefighters reached people trapped on the smoke-filled train, but it shows that a passenger asked in an emergency call at 3:45 p.m. if help was on the way. That’s 23 minutes after the initial call about smoke.

The Washington Post reported before the document was released that passengers waited at least 35 minutes in the dark tunnel before firefighters began to rescue them. Firefighters waited 13 minutes to move into the tunnel because they needed to know from Metro that power to the electrified third rail had been cut.

Alexandria resident Carol Glover died after being trapped in the smoke, and 83 other passengers were hospitalized.

Area lawyers predict that Metro will be sued for millions of dollars after the tragedy, WJLA 7 reported. The lawyer who represented families after the 2009 Red Line crash will announce the first lawsuit at 11:30 a.m. today, according to WAMU.