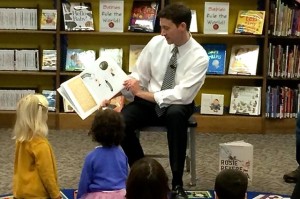 New Ward 6 Councilman Charles Allen unveiled a proposal this morning for the District to send every child a book every month from birth through age 5.

“Books From Birth” would aim to boost early childhood literacy by increasing kids’ access to books. Speaking to The Washington Post, he said he wants all D.C. homes to have books on hand.

“We have households in the District that have hundreds of books and households where the only book in the house may be the phone book,” he said.

The program would be run by the D.C. Public Library and would cost an estimated $30 per child annually, Allen told the Post.

More than 40,700 children under age 5 live in the District, according to a 2013 Census Bureau estimate. That brings the initiative’s rough price tag to more than $1.2 million a year.