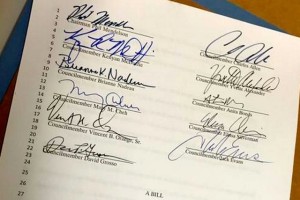 One of the first bills introduced by new Ward 6 Councilman Charles Allen is moving forward.

Allen introduced his “Books From Birth” bill today, with unanimous support from every Council member. The plan he unveiled last week would aim to boost early childhood literacy by sending every child in the District a book every month from birth through age 5.

“Less than half of third graders in the District score proficient or advanced in reading skills. It is critical that the District confront the literacy and achievement gap at its starting point, well before it shows up in the classroom,” Allen said in a statement.

The text of the bill shows that the program would be administered by the executive director of the D.C. Public Library, Richard Reyes-Gavilan. He would select the titles, and have the right to “enter into such contractual and promotional agreements necessary to effectively implement the Books from Birth program.”

Reyes-Gavilan will be able to set “guidelines for book title selection, including age-appropriate concepts and diversity of characters, culture and authors,” the bill says.

About 41,000 young children live in the District, according to figures cited by Allen’s office. Similar programs have been adopted elsewhere for less than $30 per child.

The act is now subject to review by Mayor Muriel Bowser.