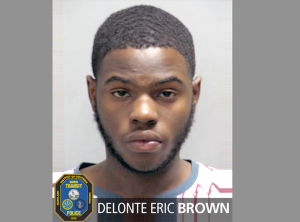 A Southeast D.C. man has been charged with shooting two passengers on a crowded Metrobus on H Street NE Monday night.

Delonte Eric Brown was arrested overnight by Metro Transit Police, they announced this afternoon. He was found in Prince George’s County and charged with assault with a deadly weapon. Brown will be extradited to D.C., where other charges may be added.

Brown is accused of shooting two men about 10:20 p.m. Monday on an eastbound X2 bus with about 40 passengers. The gunman exited the bus at 1st and H streets NW and shot through the open rear door, hitting two men, Metro Transit Police said. The victims, 21 and 47, received non-life-threatening injuries.

A woman spotted walking off the scene of the crime with the suspected shooter was sought by police yesterday. No update about her was provided today.