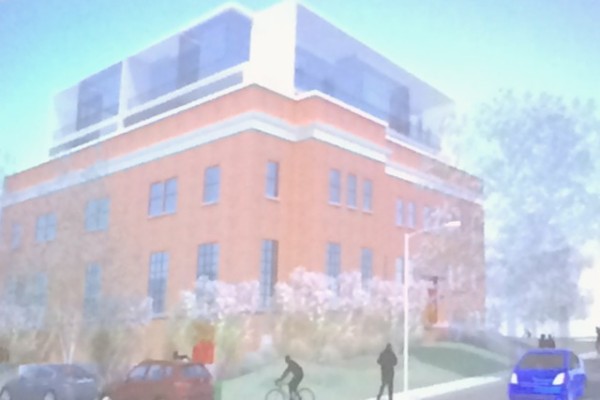 Developers presented two bids last night for the creation of senior citizen housing in the former Eastern Branch Boys and Girls Club building, but to-be-determined District rules on affordable housing creation will determine the exact makeup of the project.

The firm Dantes Partners laid out plans for 49 affordable units, 5,000 square feet of community space and two stories added to the long-closed building at 261 17th St. SE. A competing bid from Century Associates would create 25 market-rate units, 2 apartments for caregivers and 4,200 square feet of children’s play space to the building two blocks west of the Stadium-Armory Metro station. That plan would not add to the building’s height.

But new inclusionary zoning regulations expected from Mayor Muriel Bowser will determine how many units in the city-owned building will be rented at designated affordable rates.

Department of General Services planner Stephen Campbell said his office needed more information on whether rules in effect when the bid was issued, when it will be awarded or when permits are approved will apply.

“We will seek to have that clarity,” he said. DGS plans to award the project in February.

Century Associate president Joel Kelty said his proposal called for all market-rate units. “We didn’t feel, given the funding we had, that it was financially feasible,” he said.

“You’re coming into a mixed-use neighborhood. Why would you put a low-income building in our neighborhood?” she said, noting that she would prefer a mixed-income development.

ANC 6B may wait for more information from the District before the group advises selection of a proposal, vice-chair Brian Flahven said.

“I don’t want to recommend an option that is automatically disqualified,” he said.

Homes in the Dantes Partners development — which would be financed through federal Low-Income Housing Tax Credits — would be 600 to 800 square feet and cost about $1,000 per month. The Century Associates building would have units as large as 1,300 square feet each, with rent of about $3,000 per month for a two-bedroom.

The Boys and Girls Club was closed in August 2007 because of rising costs and low enrollment, officials told The Washington Post that year. The city bought the building plus two Boys and Girls Clubs in Columbia Heights and Georgetown for $20 million total, but later declared the building to be surplus property. The building in a prime location has asbestos and bird droppings inside, and it’s roof is leaking, Kelty said.

“Our whole goal is to get this building activated again,” Flahaven said.