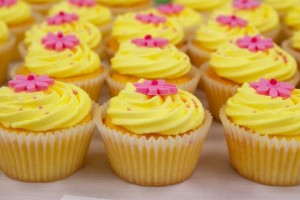 Amendments to D.C. Code that Mayor Muriel Bowser signed yesterday would require businesses that sell booze-infused baked goods to get a $1,000 liquor license and sell the sweets in sealed containers.

The Omnibus Alcoholic Beverage Regulation Amendment Act of 2014 would apply to all “confectionary food products” that contain between 0.5 and 5 percent alcohol per volume. The sealed products would need to be labeled with the brand of alcohol used, and could be sold only to customers age 21 and up, the legislation says.

The push for the bill began when the booze-infused cupcake company Crunkcakes asked ABRA what permits they would need. Faith Alice Sleeper was informed there was no D.C. precedent for alcohol-infused foods like hers, which “aim to give you cavities and liver damage at the same time.”

“I was told initially that I would need the same type of license as D.C. Brau,” she said, noting she was told that required a $6,000 a year fee. “I was a small business and couldn’t afford that.”

Sleeper worked with the office of Tommy Wells, then-councilman for Ward 6, to draft the amendment. She testified before D.C. Council in October and said she was pleased to hear the bill got Bowser’s stamp of approval this week.

“I’m happy to start my process to become fully legal,” she said.

“We would have to reassess whether it’s worth it for us,” he said about the shop’s eggnog, Bailey’s Irish Cream and tequila sunrise cupcakes.

The act would also create a festival license for art and sporting events that last 5 to 15 days. One license type would allow the sale and serving of beer and wine, for $1,000. A second class of license would allow liquor sales as well, for $2,000.

Additionally, the new law will allow District distilleries to sell cocktails containing their products, similar to how breweries are allowed to sell pints.

The act will be under review by Congress for the next 30 days.