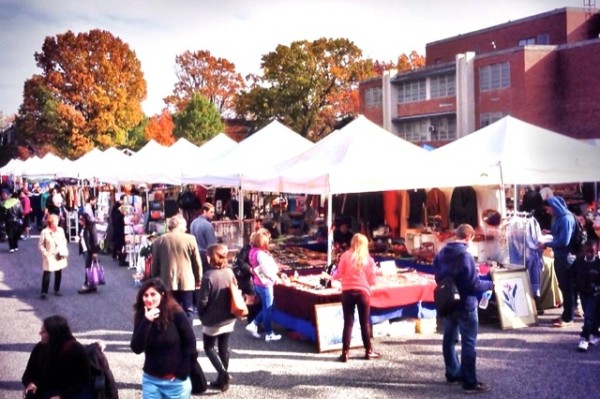 The dozens of vendors who sell jewelry, antiques and art in white tents near Eastern Market will move within months.

Now that the redevelopment of Hine Junior High School has the green light from the city, talks are ramping up to relocate Eastern Market’s weekend flea markets to make way for the work. The vendors who usually operate just north of the school will move onto 7th Street SE, representatives for the flea market, developer and community groups said.

“The market dates aren’t definite because we don’t know how long hazmat [work] will take,” Golding said about initial work set to start at 8th Street and Pennsylvania Avenue SE in mid-February.

Permits for the relocation that’s years in the making have been approved, according to Barry Margeson, market manager for the D.C. Office of Property Management. The exact layout of the market will likely change during different phases of construction.

The manager of the flea market held on Sundays said 7th Street won’t provide room for all 100 of the 10-by-10-foot market booths.

“There’s no way to accommodate all my vendors,” Michael Berman, executive director of The Flea Market at Eastern Market, said. “We’re working now on how many spaces can be accommodated.”

Hoskins, a C Street SE resident, said she appreciated the developers’ regular communication with local groups, including their agreement to attend weekly meetings.

“I’m encouraged by the fact that the developers have committed to sitting down on a regular basis,” she said.

The manager of the flea market held on Saturdays, Carol Wright, did not respond to an inquiry.

An update about the Hine Project will be provided at the ANC 6B meeting set to be held Feb. 10 at the Hill Center (921 Pennsylvania Ave. SE).

Stanton and its partners, collectively known as Stanton-EastBanc, will replace the closed school with seven stories of retail space, offices, underground parking and more than 150 residential units, some of which will be affordable and designated for seniors. After a long fight by a group of locals to reduce the height and density of the buildings, the D.C. Court of Appeals rejected a request to send development plans back to the D.C. Zoning Commission. The $150 million project is slated to be finished in late 2017 or early 2018.

Shoppers at the flea markets can expect to find a familiar set of vendors on 7th Street, Berman said.

“It won’t be the same layout, but we hope to accommodate as many of our longterm vendors in our temporary space,” he said.