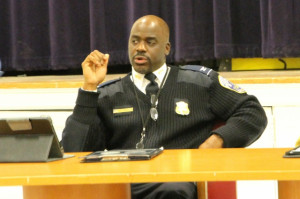 (Updated at 3:15 p.m.) Police have arrested a boy for the stabbing of a biker on 7th Street SE last month.

The juvenile accused of randomly attacking a man on Jan. 13 was arrested after he was caught on surveillance video and identified by the victim and witnesses, First District Cmdr. Jeff Brown said at a community meeting Tuesday night. The alleged attacker attends Richard Wright Public Charter School, located in the “Blue Castle” building, Brown said.

The attack was “completely unprovoked,” according to the victim’s account of what happened, Brown said. The boy punched the man in the chest, and only later did he realize he was bleeding, Brown said.

Brown highlighted at the monthly Citizens’ Advisory Council meeting that overall crime is down in the Metropolitan Police Department’s First District, which covers Capitol Hill, Hill East, Navy Yard and the H Street corridor. Forty violent crimes have been reported in the area in the past 30 days, compared with 48 reports in the same period last year. Property crimes have risen slightly, District crime data shows — from 438 reports in the past 30 days to 421 reports in that time in 2014.

Here are other crime and community updates Brown gave:

Family’s Cars Still Missing — After a family had both of its cars stolen from F Street NE within hours, police are beefing up their patrol of Police Service Area 104. That area covers the H Street NE corridor. Other cars stolen from the area have been found in the Fifth and Sixth Districts, but those two cars have not been recovered.

Southwest Shooting Update — The 27-year-old Southwest resident who died Jan. 11 after being shot was struck inside a home during a party, Brown said. The shooting occurred about 6:55 p.m. Jan. 11 on the 1300 block of 1st Street SW.

Bystander May Have Been Hit in H Street Shooting — Police are still investigating whether an innocent bystander was shot on H Street NE the evening of Jan. 24. “We’re still trying to verify his account of what happened,” Brown said about the man shot on the 900 block of H Street NE about 8:20 p.m. Another man was the intended target, police said.

How to Stay Informed — Brown told locals they can stay informed about crime and safety by signing up for the First District listserv and D.C. Alerts, and attending monthly Citizens’ Advisory Council meetings.

Community Service — Police described their efforts to hold a clean-up day in PSA 105 and collect backpacks for needy kids. “What we do is a lot more than fight crime,” Brown said.