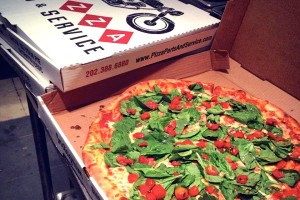 After less than 10 months on H Street NE, Pizza Parts & Service has called it quits.

The owners of Taylor Gourmet, who ran the spinoff pizzeria at 1320 H St. NE, announced this afternoon that they will not reopen.

“We’d like to thank H Street NE for the love and support. While we’ll miss slices and garlic knots, we’re really, REALLY excited about who is taking over the space,” owners David Mazza and Casey Patten said in a statement. “The neighborhood is in very good hands!”

Frozen Tropics spotted earlier today that the business had closed abruptly, and a tipster told Popville its space was for rent.

A Taylor Gourmet spokesman declined to reveal what’s coming to the space next, and Papadopoulos Properties, which is leasing the space, did not immediately respond to an inquiry.