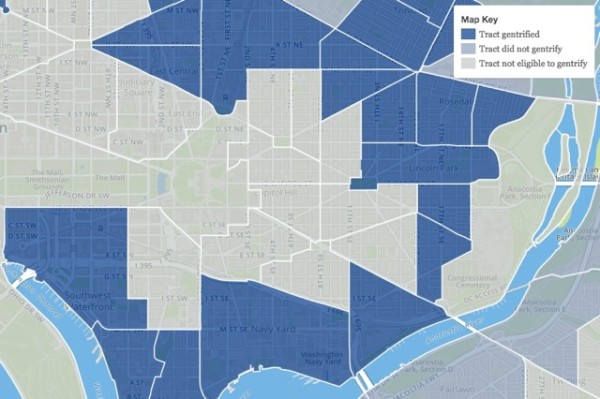 (Updated at 6 p.m. Monday) In the past decade, home values in Shaw and near the H Street corridor have climbed more than anywhere else in D.C.’s Ward 6.

In a portion of Shaw roughly bounded by 7th Street NW, O Street NW, Florida Avenue and New Jersey Avenue, the median home value rose 231 percent from 2000 to 2013, to $568,700. That’s according to an analysis of Census Bureau data released this week by the policy publication Governing.

Using Census tract data for 2000 and for 2009-2013, an interactive map by the publication shows which parts of the city that previously had low household income and low median home value had significant growth in home values and educational attainment.

In the triangular area bounded by 8th Street NE, H Street NE, and Maryland Avenue NE, the median home value rose 193 percent from 2000 to 2013, to $591,600. Thirty-four percent of adults there had bachelor’s degrees in 2000. According to the most recent estimate, about 60 percent do now.

The Census tract just east of there changed similarly The median home value in the area bounded by 12th Street, Maryland Avenue, 15th Street and C Street NE rose 191 percent, to $544,900, from 2000 to present. The percent of adults with bachelor’s degrees there rose from 22 percent to 66 percent.