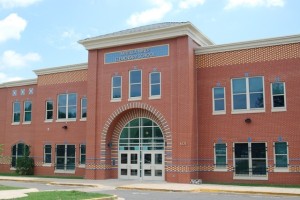 (Updated at 6:10 p.m.) D.C. police have arrested a teacher at Miner Elementary School and charged him with misdemeanor sex abuse of a child.

It wasn’t immediately clear if the victim is a student at the 601 15th St. NE school, or if the alleged crime occurred there. Miner serves students in pre-kindergarten through fifth grade.

A misdemeanor sex abuse charge typically applies to touching, rather than a sex act, D.C. Code shows. It is punishable with as much as 180 days of jail time.

Principal Anne Evans sent parents a letter on Friday saying Ware had been put on leave and school counselors are available.

“Last week, when it was brought to the school’s attention that there were issues of inappropriate behavior, we took immediate and swift action sharing this information with MPD, who then began an investigation right away,” she wrote.

“Like you, I am deeply upset about these allegations,” she continued. “We are all shocked and concerned. Our attention remains focused on supporting our students.”

No lawyer for Ware is listed in online court records.

Police had this request: “Anyone who has information regarding similar offenses involving Mr. Ware should call police at 202-727-9099. Additionally, information may be submitted to the text tip line by text messaging 50411.”