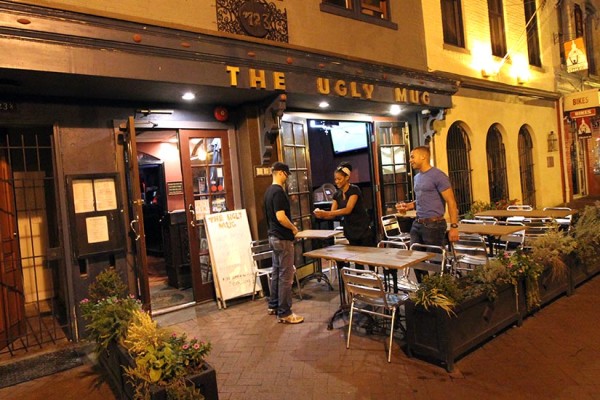 Plans first presented six months ago to expand the Barracks Row bar The Ugly Mug are on hold for at least another week.

The liquor license committee of ANC 6B voted last night to give locals until Tuesday to weigh in on a proposal for more seating and a retractable roof. Commissioners decided in an 8-0 vote with one abstention that community members potentially affected by noise from the bar needed more time to evaluate the plans announced in September.

Ugly Mug owner Gaynor Jablonski and ANC 6B previously drafted an agreement to allow 55 people on the interior of the second floor and 40 people on the second-floor atrium with retractable roof. Under the agreement, the roof of the 723 8th St. SE bar would need to be closed after 10:30 p.m. Sunday through Thursday, and midnight Friday and Saturday. The roof would need to be made from sound-dampening materials, and a sound-level meter would be installed.

Jablonski said locals have had ample opportunity to discuss their concerns about noise.

“This group has had every chance to meet with me, and no one wanted to,” he said.

To try to gauge how loud patrons on the atrium would be, Jablonski and engineers assembled a group of 40 men, all talking with raised voices.

“This is a worst-case scenario,” he said about the situation he created. From 40 feet away, which is the distance of the closest home, the sound was measured at 49 decibels, he said — about the volume of an “urban residence,” according to a U.S. Occupational Safety and Health Administration decibel scale.

Adam Ford, designer of the retractable roof, vouched for its sound-blocking properties. He designed the enclosures at The Argonaut (1433 H St. NE) and Jack Rose Dining Saloon (2007 18th St. NW) and said the Ugly Mug’s roof would block even more sound.

The handful of neighbors in attendance said they wanted additional data on sound levels.

“We are just neighbors trying to protect our interests,” 7th Street resident Bernard Renard said. “This is going to be 95 people talking and singing and whatever, under the influence of alcohol — not having coffee and doughnuts.”

Richard Bianco, a lawyer representing a group of nearby residents, also called for more sound data.

“What they’re essentially saying is ‘We don’t know,’ and you don’t know either,” he said.

“I have seen the owner bend over backwards,” she said.

ANC 6B will take up the matter at its full meeting at 7 p.m. Tuesday. If the ANC opts not to support the agreement with Jablonski, his application will be heard by the D.C. Alcoholic Beverage Regulation Administration.